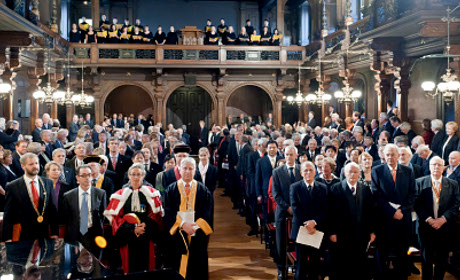 At its traditional annual gathering to mark the opening of the 2010/2011 academic year, Heidelberg University also ushered in its 625th anniversary celebrations.

At its traditional annual gathering on 23 October to mark the opening of the 2010/2011 academic year, Heidelberg University also ushered in its 625th anniversary celebrations. This year’s festive assembly, which united University members, friends, sponsors and alumni, highlighted Heidelberg’s partnerships in the field of higher education. Delegations from universities in Hungary, Poland, the Czech Republic, France, China and Russia were present. Traditionally, the assembly is the setting for the conferral of the title of “honorary senator” on individuals who have displayed extraordinary and sustained commitment to the University. The 2010 „Jahresfeier“ was no exception in this respect. This year’s recipient of this signal honour was French scientist and university president Prof. Dr. Dominique Deville de Périère from Montpellier. 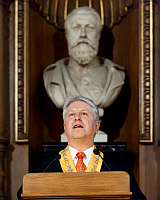 Heidelberg University’s Joint Faculty of Sciences and Mathematics honoured Marburg scientist Prof. Dr. Dr. h.c. Walter Kröll. At the suggestion of the Faculty of Physics and Astronomy, he was awarded an honorary doctorate for “his services to research in the sciences at Heidelberg University and his outstanding commitment to the establishment of a network connecting the University with the non-university research institutions in its immediate vicinity”. Prof. Kröll was founding rector of the University of Essen and president of the University of Marburg, chairman of the executive board of the German Aerospace Centre, president of the Helmholtz Association of German Research Centres and a member of major national and international scientific bodies. In Heidelberg he was a highly active member of the University Council and of the Advisory Board counselling the University on its proposal for the Excellence competition. A speech of praise in honour of Prof. Kröll was given by Heidelberg environmental physicist and former Vice Rector Prof. Dr. Kurt Roth.

The status of honorary senator of Heidelberg University was conferred on dentistry professor Dominique Deville de Périère in “recognition of her outstanding personal commitment to Europe’s oldest university partnership and the promotion of academic and personal relations between the Universities of Montpellier and Heidelberg”. Initially at the helm of Université Montpellier 1, she is now president of the PRES Université Montpellier Sud de France. This puts her in charge of the amalgamation of the three universities in Montpellier. Alongside her scientific and administrative functions at university level, Prof. Deville de Périère is also highly active in research and research management on the national plane. After the speech in her honour, Prof. Eitel presented her with the official document and solemnly declared Prof. Deville de Périère honorary senator of Heidelberg University.

Further distinctions were also presented at the ceremony, during which the Klaus-Georg and Sigrid Hengstberger Prize 2010 was awarded to young researchers from Heidelberg University. This year there were four such awards, each endowed with 12,500 euros. This gives the recipients the opportunity to organise a symposium of their own at the International Science Forum Heidelberg (IWH). Heidelberg jurist Prof. Dr. Paul Kirchhof presented this year’s award-winners Dr. Claudia Wagenknecht and Dr. Thomas Amthor (physics), Prof. Dr. Marc-André Weber, Dr. Erick Amarteifio and Dr. Armin Nagel (radiology and medical physics), Dr. Rodney Ast and Dr. Patrick Sänger (papyrology) als well as Dr. Bernhard Höfle (geography) to the audience. The moderator of the ceremony was Prof. Dr. Jochen Tröger, Rectorate commissioner for the 625th anniversary celebrations.

In 2011, Germany’s oldest university will be celebrating its 625th anniversary. From October 2010 to the next "Jahresfeier" in October 2011, it will be organising a wide range of events designed to present the entire range of its achievements and offerings and at the same time to provide impulses for ongoing development. The invitation to attend these events extends not only to members, friends and sponsors of the University but also its partners and alumni and the citizens of Heidelberg.