In their newsletter, the anniversary team kept you informed about the ongoing events on a regular basis.

All issues of the Newsletter

The small working group consists of the rector’s delegate for the 625th anniversary, his deputy, student project assistants and representatives from university administration, the Communications and Marketing Department, UniTT Event Management, and the sports delegate. Experts are also consulted when necessary. Weekly meetings are held to discuss anniversary year requirements, which are handled in close cooperation with the rectorate, the faculties, the academic and service institutions of the university and their partners. The goal is a broad spectrum of programmes in which all the institutions of the university participate. The small working group is the core of the anniversary celebration, coordinating the various activities and assisting in their organisation.

Do you have questions, suggestions or ideas for our alma mater’s anniversary? Send us an e-mail at 625@uni-heidelberg.de.

We would be delighted to hear from you! 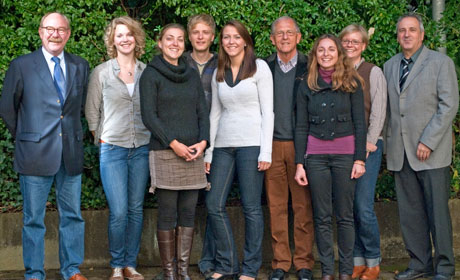 Members of the working group – a brief introduction

Formerly vice rector of Heidelberg University, Prof. Dr. Jochen Tröger is the rectorate’s delegate for the anniversary year. As vice rector for medicine, and later for research and the medical institutions, he advanced the development of Heidelberg as a research centre. He was department head and medical director of the department of pediatric radiology at Ruperto Carola. After retirement, he was conferred the title of Distinguished Senior Professor for his very special services to the university.

Dr. Lutz Bandekow assumed organisational responsibilities for the anniversary year preparations and serves as representative for Prof. Dr. Jochen Tröger, the rectorate’s delegate for anniversary year planning. Lutz Bandekow, born in 1948, entered the German armed forces after completing his Abitur in 1968. He studied medicine in Heidelberg from 1971 to 1978 and then returned to the military. Until his retirement at the rank of Major-General Surgeon in 2007, he served in a number of posts, including as Chief Physician of the army hospital in Berlin and as Medical Corps Commander in East Germany.

Initially with the Personnel Department of Central University Administration and active several years in the Staff Council, Jürgen Brachmann assumed the role of Executive Officer of Heidelberg University in 1988. He is an active member of the 625th anniversary working group, and he also helped planned the university’s 600th anniversary as well.

The Director of the Institute of Sports and Sports Sciences, Gerhard Hamsen, studied to be a teacher of English and sports science. He has been with the Institute of Sports and Sports Sciences since 1974, first as a research associate, subsequently a lecturer, and eventually Academic Director emeritus. Besides heading up the Institute’s administration, Gerhard Hamsen teaches soccer, tennis, skiing and empirical work methods/statistics in the teaching programme.

Christiane Wickenhöfer has served as personal aide to the rector’s delegate and his representatives on the 625th anniversary team since 1 April 2010. Following a traineeship in banking business management, she studied European art history, classical archaeology and Egyptology in Frankfurt (Main) and Heidelberg. Christiane Wickenhöfer’s previous experience includes working for Sotheby’s auction house and for the Ribbentrop Gallery in Eltville (Rhein). She has worked at Heidelberg University since the end of 2001, first as a personal aide to Prof. Dr. Jochen Tröger, vice rector for research and structure, and subsequently in the same position for his successor, Prof. Dr. Kurt Roth.

Florian Steur (b. 1981) has worked for Heidelberger UniTT event management since January 2010, where is responsible for the 625th anniversary plans. Born in Ulm, he completed a traineeship in banking and continued his studies in economics at the universities of Mainz and Leeds (UK). While in the UK, Florian Steur also served as a corporate event manager.

Claire Born has been a student assistant on the anniversary staff since September 2010. Born in 1988, she grew up in Ingelheim on the Rhine and is currently in her third semester as a political science major and her first in psychology. After her Abitur in 2008, she volunteered with burundikids e.V. in Burundi in Eastern Africa helping orphans and street children in the civil-war torn country. Besides her work with the anniversary staff, she also runs courses related to political youth education.

Hailing from the far north of East Friesia, Morten Edzards has been steeped in history and political science at Heidelberg University since 2005. Prior to starting his studies, he spent a year and a half in Jerusalem, where he volunteered at a school for the disabled. He’s been with the 625th anniversary planning committee since April 2011.

Project assistant Katharina M. Herdtweck, a student member of Jochen Tröger’s team, is responsible for office and communications tasks. Born in Stuttgart in 1981, she has been enrolled at Heidelberg University since 2004, studying English, romance languages and ethnology. Study trips abroad have taken her to Scotland and the United States.

The Göttingen native has been supporting the anniversary staff since April 2011. On completion of her Abitur in 2008, she initially chose the University of Duisburg-Essen for its Kulturwirt programme with a degree in business and cultural studies. She gained valuable experience in managing musical and cultural events in preparation for the city of Essen’s “2010 Cultural Capital of Europe” event. She’s been studying political science and English at Heidelberg University since 2009.

Born in Freiburg, Nikolai Sexauer has been studying political science and psychology at Heidelberg University since 2009. Prior to coming to Heidelberg, he spent a year volunteering in Rotterdam with "Art.1", a national association working against discrimination. He has been working as an assistant to the 625th anniversary working group since the end of 2009.